Sir Christopher Lee died this week, although we’re just hearing about it today. He was 93, and an actor of uncommon talent, although because of his looks, his height, and the depth of his voice, he will forever be known for his villainous and monstrous roles.

For many of these latest generations, Lee will be remembered as Saruman the White in Peter Jackson’s Lord of the Rings Trilogy and Count Dooku in the Star Wars prequels.  He played pirates, generals, demonologists, wizards, Frankenstein’s monster, the Mummy, Lord Baskerville, the Man with the Golden Gun, a bit part in 2012’s Dark Shadows, and three roles (one uncredited) on one of my all-time favorite tv series:  The Avengers.

But for me, and for the millions of horror film fanatics across the world, Lee will always be firstly and royally  remembered as the king of the undead, the Prince of Darkness, Dracula. 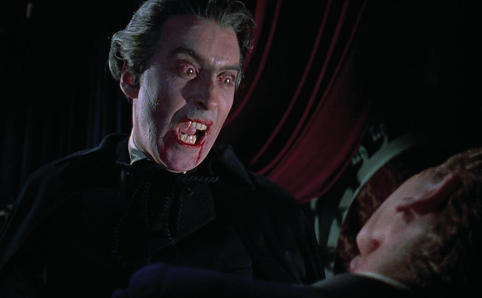 Dracula dies and keeps coming back.  It’s just like the rising and the setting of the sun.  Sir Christopher is gone to us now, yet his legacy–decades of memorable roles, hours upon hours of storytelling about good vs. evil, magic and reality–remain.  Sir Christopher Lee will shine forever on the silver screen and our flat screens.