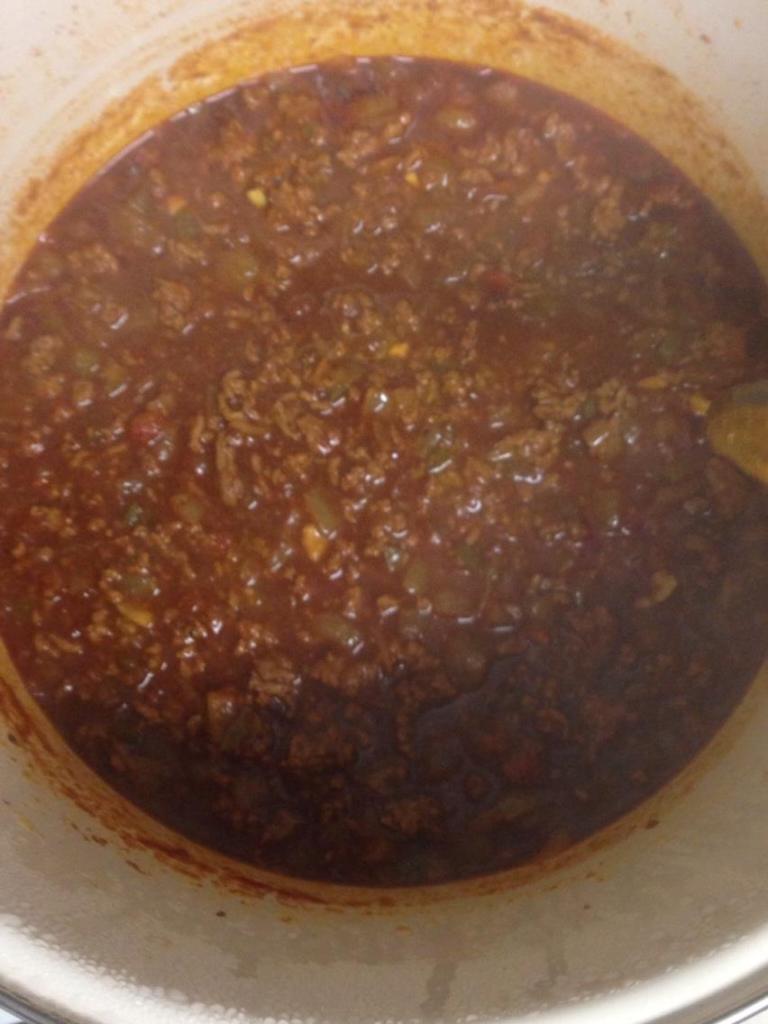 My chili pot, swimming with ground beef, onions, and beautiful chunks of garlic.

The chili recipe below is easily available from a ton of sites on the Internet.  But here’s a little background on the original version, and a personal story, which explains why I’m reprinting it here — besides it being absolutely delicious.

About a year ago a friend in Texas, Ana, lost her copy of a recipe for Texas Chain Gang Chili. She wrote to me, because it seems that I gave it to her, and she claimed it was the single best chili recipe ever.

I immediately went to my own cookbooks — and my wife’s — and could not find the recipe.  (I’m stupid, I guess, because I later found it in one of the books I originally looked through.)  I searched on the Internet a few days later, but forgot what the recipe was called, so I had to write Ana back and ask again.  By this time she had found her own copy — but I was determined to find out exactly what I had given her years beforehand.

I found it on the Internet, and on many sites.  It looks like all the sites that have it copied it from one man’s site, because all the recipes mention the guy’s Aunt Diane.

I have no idea who Aunt Diane is, because she didn’t come up with the recipe.  She copied it from a cookbook, watered it down a little, her nephew copied hers, and now the whole recipe collection network on the Internet has copied it.

So, after not finding, then finding, then losing the recipe, I waited, and waited, and finally my yearning for homemade chili overtook me just a few, frigid weeks ago.  Again, I couldn’t find the damn cookbook (it was in the bedroom hiding in a stack — I never would have looked there!) so I went online and got the recipe.

Made it.  It was too thick.  Added a cup of water, some more chili powder, a little garlic powder.  Nice.  But not hot enough.

Then I found my copy of the cookbook yesterday while tidying up, and my instincts were dead on: Aunt Diane had changed a couple of things to take out some of the original’s heat and make it thicker.

Not good, Diane.  You wussed it down.

So here is the authentic recipe, although I’m copying Aunt Diane’s version from the Internet, so you can see that I’m restoring the intent and ingredients of the original.  My comments, and the differences between the original recipe and the ‘net version, are in red.  Personal comments are in parentheses.

By the way, I urge you to get the real cookbook.  You can order it here.  The restaurant can be found here — go north and experience joy . . .

8 medium cloves garlic minced (I like garlic, so I used large cloves)

2 tsp Cayenne pepper to taste. (Aunt Diane left this out. CRAZY! By the way, after refrigeration, a lot of the heat disappears. PUT IN THE CAYENNE!)

2 16oz cans dark red kidney beans rinsed and drained. (I consider beans OPTIONAL, although they are included in the original recipe. Authentic chili doesn’t have beans.)

* Add tomatoes and stock and bring to boil.