It’s Sunday, so that means at 9:00 p.m. for the next few months I will be watching the local Fox channel (note: NOT Fox News) and savoring the hour long Moment of Wonder that is the new Cosmos.

Across the vast landscape of inane reality shows (that are mostly scripted in advance) with rich housewives and botoxed wannabe celebrities, hour long dramas starring no one over the age of thirty (Logan’s Run has become real, in a television sense), and all the smart, edgy shows on HBO, Netflix, Showtime, and other alter-networks, Cosmos is a breath of fresh air on basic cable that deserves much more than a limited run.  Cosmos deserves at least a seven-year commitment.

Even though the star of the show is Neil Degrasse Tyson–and I can’t think of a more personable scientist to show laymen like me what science is all about–the real star is the science itself.  By showing us things we may not have known before, and in ways that we may not have before imagined, Cosmos is completely unlike any other show on any channel.  It’s not just a documentary; it’s a way of presenting facts and knowledge and giving it all personality.  It shows us, through example and through the sheer excitement of discovery, that the universe around us is filled with magnificence and wonder, and that the awe we experience merely looking through a Wal-Mart telescope and seeing the rings of Saturn for the first time is delivered to us by reality, by intelligence.

Eve, if you’ll remember, while in Eden, took a bite of the fruit of the tree of Knowledge.  That, apparently, was a no-no; and perhaps that’s the root of why so many conservatives and evangelicals across the Interwebs are in an uproar over Cosmos.  Cosmos and science rely on facts and said accursed Knowledge.  Religion relies on belief and supernaturalism. Here are some representative tweets sent out by fundies after the first show two weeks ago: 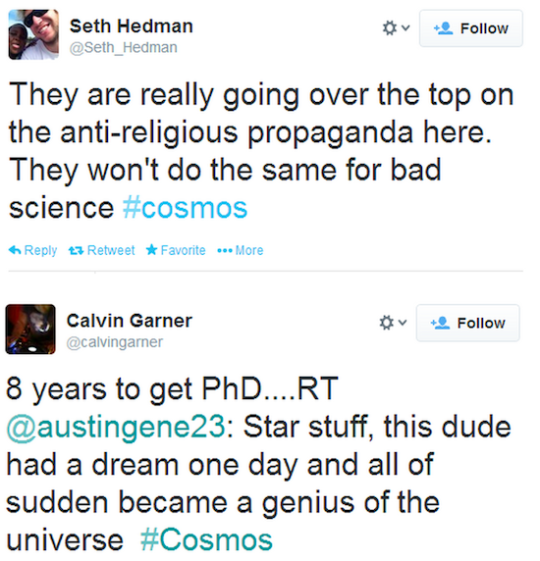 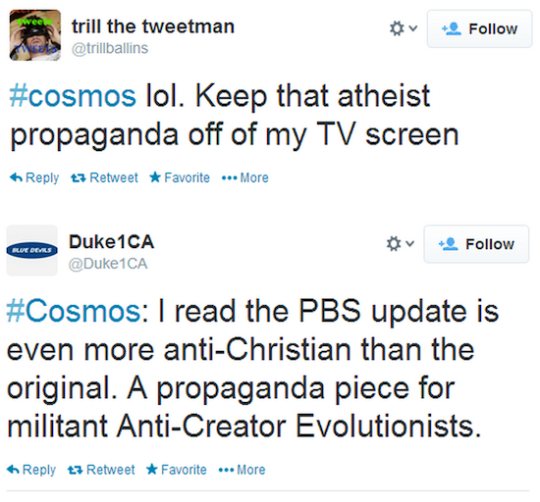 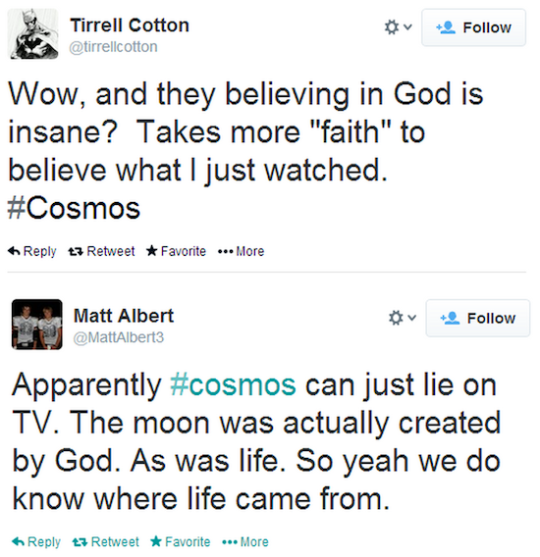 Besides displaying a complete misunderstanding of what science is all about, they make their contempt for knowledge plainly obvious.  Is it any wonder that so many conservatives and fundamentalists are trying to detour tax dollars from public schools to charter schools?  Go here if you need to see for yourself.   They don’t want real education.  They want Christian education . . . and indoctrination.  They can’t get that–by law–in public schools, so they want our tax dollars transferred to send their precious little snowflakes to charter schools . . . schools that refute climate change, that laugh at evolution, and take our non-denominational taxes to promote Christian fundamentalism.

Cosmos is blocking their efforts to theocratize America.  Even though the teaching (and proselytizing) of creationism has been declared illegal in public schools, most recently in the Dover case (I highly recommend that you read Monkey Girl for all the details), our heel-digging fundies will not stop to wedge their far-right Christian beliefs into every facet of our lives.  And I use the term wedge deliberately, for the Wedge Document was an important and illuminating aspect of the tactics of organized creationism . . . and a reason why the teaching of creationism violates the separation of church and state (which they’re still trying to make us believe does not exist.)

Tough titty.  Reality is a poker game.  It doesn’t matter what you believe the cards are in your hand; what matters are the facts.

Yes, you might believe that you have two pair here.  And you do.  But the hand is really a full house.  The point: your belief doesn’t matter.  The facts do . . . and no matter what you believe, you can’t change the cards, or the facts.  You can just understand them, and deal with them, using knowledge.

Enjoy Cosmos.  And enjoy the fits of paroxysm that the show is causing in the far-right wing.  This is comedy.  Cosmos is reality.