I made a new friend on Facebook today, and that has impelled me to finally review one of the best books I’ve read so far this year.  The new Facebook friend is Scott Tracy Griffin, and he is the author of a powerful new look at Edgar Rice Burroughs’ most popular character, Tarzan of the Apes. 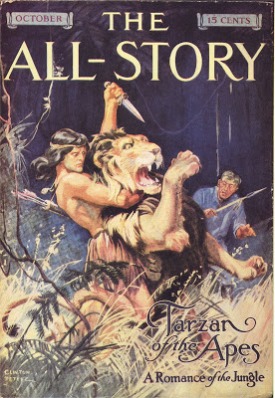 It’s a little dated and a little cartoonish, but the power, and the savagery, are evident–and that’s what sold the readers of pre-Depression America on the adventures of a little boy lost in the jungle: a world previously unimagined, of talking man-apes, exotic and deadly creatures, and a little, lost English child raised by apes.
And this is how the character exploded into the mainstream — the look that the world grew up with, imagining themselves to be swinging through the trees with Boy and Cheeta . . . 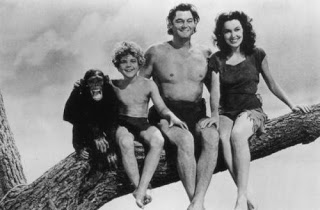 Over the years, the movie Tarzan (and its accompanying Hollywood family unit) became the Tarzan we’re all familiar with.
But the purists — the readers, the comic book artists and writers, the painters — never forgot the Tarzan who ate the raw flesh of a kill; the Tarzan who danced wild in the primitive tribal orgies of the Mangani, who raised him; the Tarzan who strangled or stabbed natives and outsiders who threatened the sanctity of the jungle; the Tarzan whose war cry, his cry of triumph over a ferocious enemy, was not something to be lampooned by Carol Burnett, but was so guttural, so savage, so feral, that its echo through the African forests would strike terror into the hearts of those who heard it.
It is that Tarzan, the original ape man, who is celebrated in Scott Tracy Griffin’s . . .

Starting with the cover by master comics illustrator Neal Adams, this is a book that has been needed for years.  It captures the spirit of Tarzan and firmly places the character — and its allure — in context with the times, and with its placement in Hollywood.  Even before Mickey Mouse became a marketing and merchandise powerhouse, Tarzan was number one with audiences: at the newsstands, in book stores, and in the silent theaters across the world.
Each original novel gets its own chapter, offering synopses and commentary.  Other chapters are dedicated to the films, radio, comic books and newspaper strips, foreign publications, and even Tarzana, the area of Los Angeles that Edgar Rice Burroughs created.  Smaller chapters present a biography of Burroughs, and detailed looks at Tarzan’s Mangani; the Waziri, the tribe that made Tarzan its chief; lost cities and lost races that the ape man encountered, and even a great map of the places Tarzan explored. 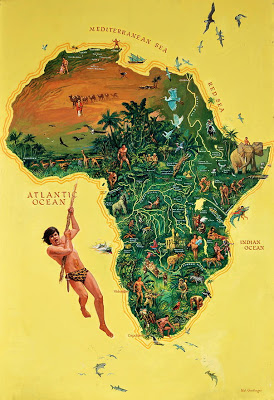 Griffin’s commentary is insightful and authoritative.  But the real star of this book is the art — the illustrations and cover paintings that represent a century of adventure illustration.  Most of Neal Adams’ cover paintings from the Ballantine paperbacks of the mid-late 1970s are here, as are the covers — and about a gazillion illustrations — of many American and international editions, starting with the first hardcover, published in 1914 . . . 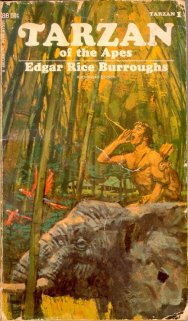 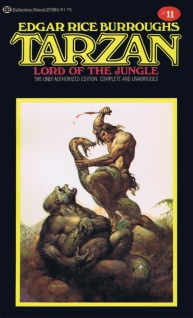 . . . and including pieces by my favorite Burroughs artist, Frank Frazetta, who I think perfectly and elegantly captured the ape man in all his savage grandeur with this solitary black and white line drawing . . . 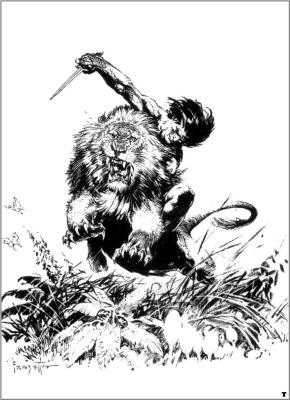 Tarzan: The Centennial Celebration is the best illustration book of 2013.  It is, simply, beautiful.  You can order it from Barnes & Noble or Amazon, or get it at an independent bookstore.
I strongly suggest you pick up a copy to cherish and celebrate your inner jungle lord.